Commander Jane Allen, the Victory Walker, set off from HMS Victory on 21 October 2017, to walk anticlockwise round the coast of mainland Britain raising money for two naval charities, the WRNS BT and RNRMC.

This week marks the final stretch of her mammoth challenge, and what a challenge it's been! She finally crossed back into Portsmouth this week, having completed over 5,400 miles in over a year and a half, overcoming numerous obstacles, adverse weather conditions and even a few injuries along the way. In her final week, she will be calling at various Royal Navy establishments around Portsmouth before finally crossing the finishing line at HMS Victory on Friday, 6 September.

Jane’s final leg saw her making her way towards Gosport. She made a stop at the National Coastwatch Institution lookout at Fort Blockhouse, sited within the former HMS Dolphin Submarine school, where she was welcome by a group of uniformed watch keepers who turned out specially for the occasion.

Jane arrived at HMS Sultan in time for bacon butties in the Haven, a welfare facility service and chaplaincy's drop-in-centre on the base. She addressed the gathered throng with stories of how her naval training got her through some of the toughest times during the challenge; she faced the worst weather conditions, uneven terrain and a severe injury and yet she kept going. In truth, she said, the last 200 miles have been a struggle now she knows she is nearly at the end. Raising money for her chosen charities has been the underlying motivation for Jane throughout the challenge. 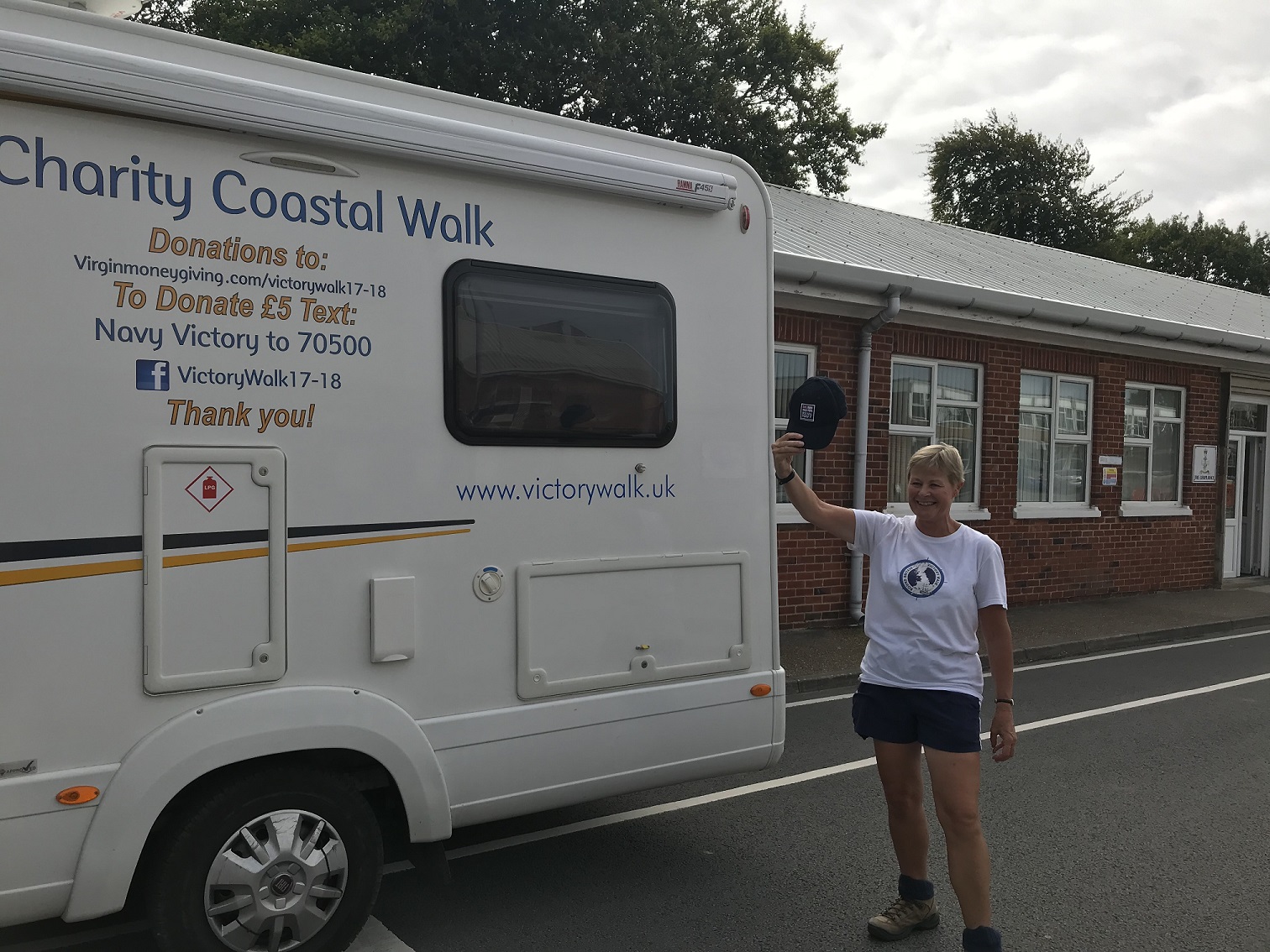 Jane’s visit to HMS Collingwood saw her welcomed by personnel across the site who had raised donations for the charities in anticipation of her arrival. She then toured the site meeting sailors and personnel, sharing some of her experiences of this mammoth challenge along the way. A highlight of her tour was the visit to the establishment’s nursery where she was welcomed by some of the children.

Concluding her visit to HMS Collingwood in the Wardroom for lunch, Jane also received donations from the site, it’s annual Open Day proceeds and the Warrant Officers’ and Senior Rates’ Mess.  Addressing the gathered supporters she thanked everyone for their support saying, “I’ve really enjoyed going around Collingwood today. It’s been fantastic. Going to the Nursery was amazing, seeing all the opportunities that the children have.”

Before departing she said,“Thank you so much for all the generous donations today. I’m now going to walk to HMS Excellent, so if you see me this afternoon don’t offer me a lift!” 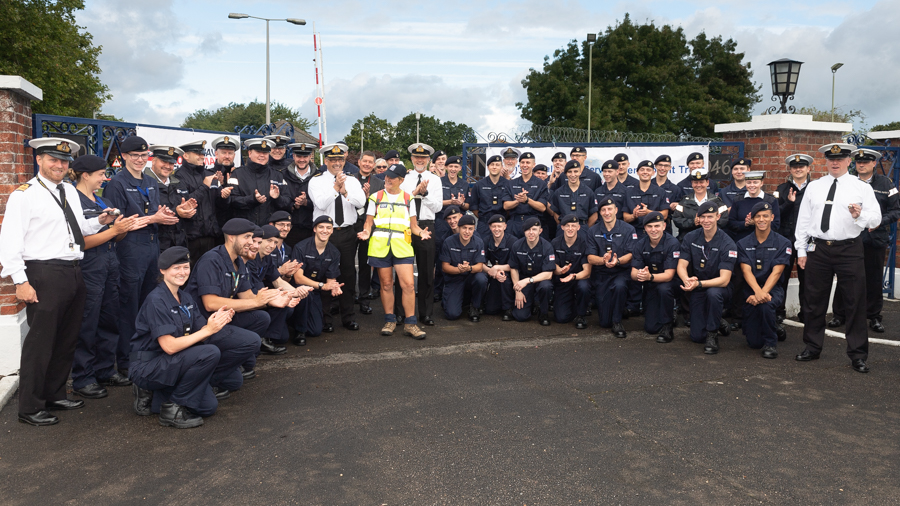 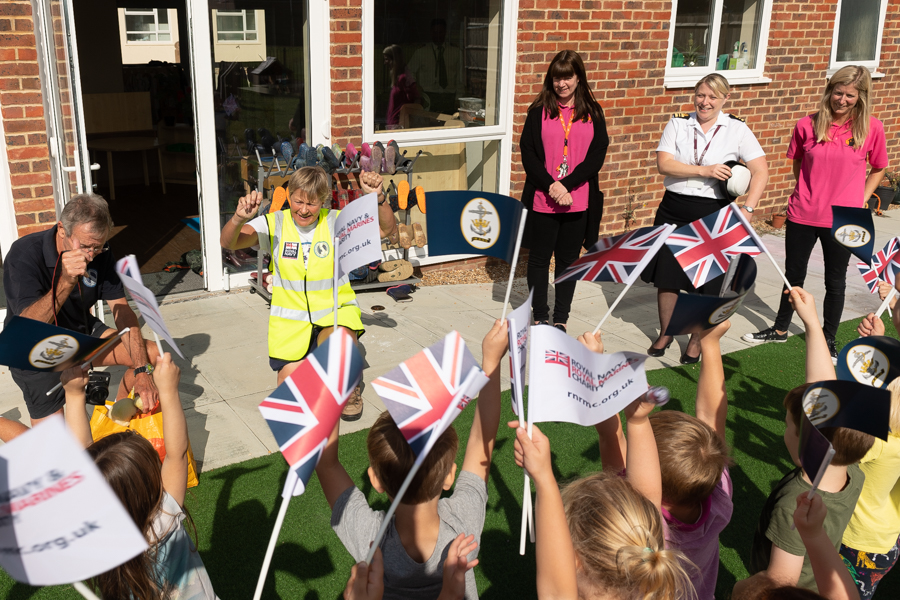 Jane's penultimate day brought her to HMS Excellent on Whale Island, home to the Navy Command Head Quarters (NCHQ) and the Royal Navy and Royal Marines Charity. She was welcomed onto the island by children from the establishment’s nursery, who waved flags upon her arrival.

Jane then made her way over to NCHQ where she was greeted by a round of applause by military and civilian staff at the building. A cake sale was held in the lobby with donations going towards Jane’s fundraising total. Rear Admiral Michael Bath addressed the crowd and personally thanked Jane on her achievements.

Following lunch at the Wardroom, Jane then headed over to the RNRMC office to meet with staff, who have been supporting her endlessly throughout her challenge. Armed with cups of tea, and even more cake, Jane shared some of her highlights and low points during the challenge. She said it was the hundreds of people she met along the way that really stood out for her adding, "The random and spontaneous acts of generosity from strangers really blew me away." 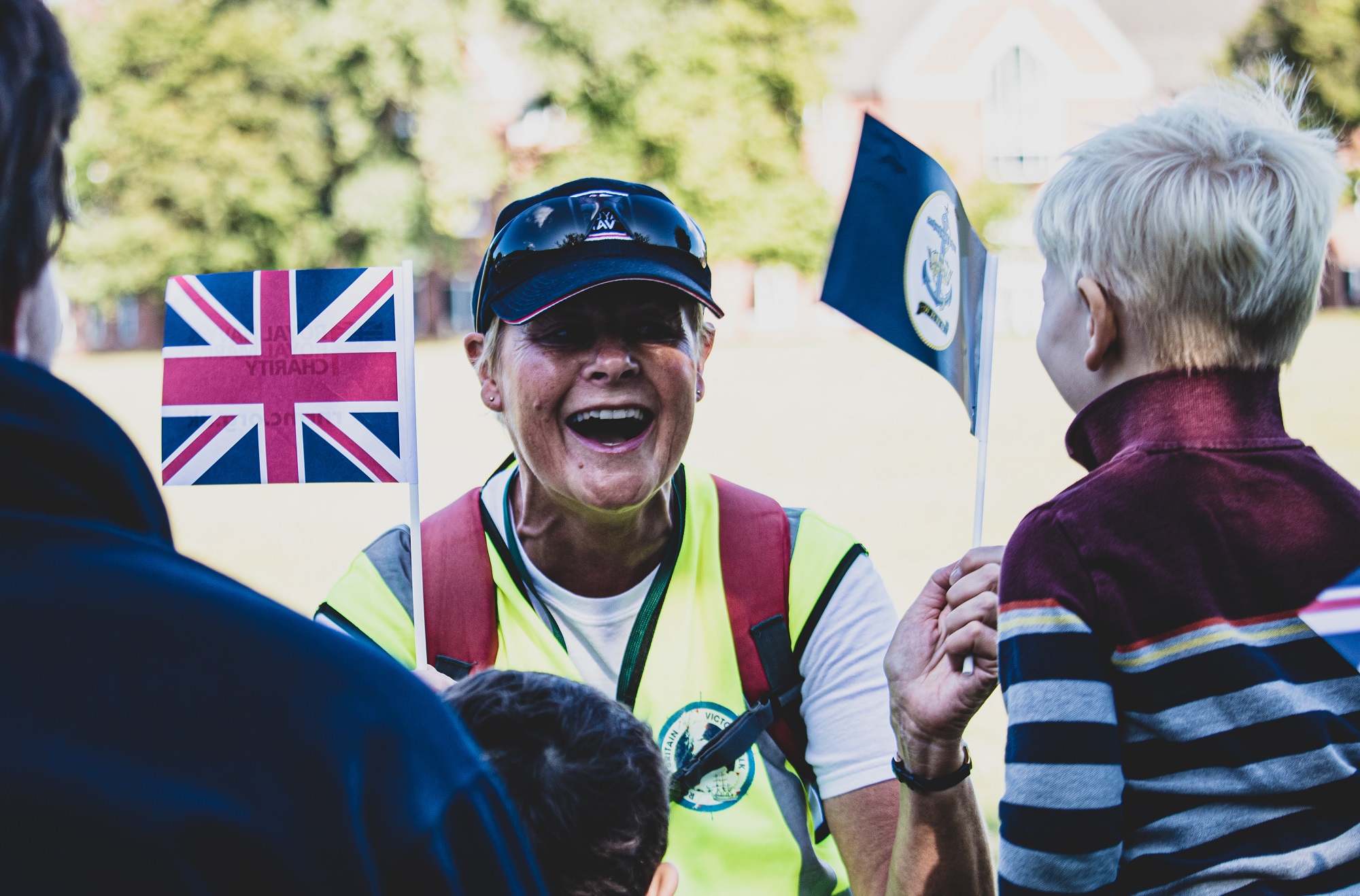 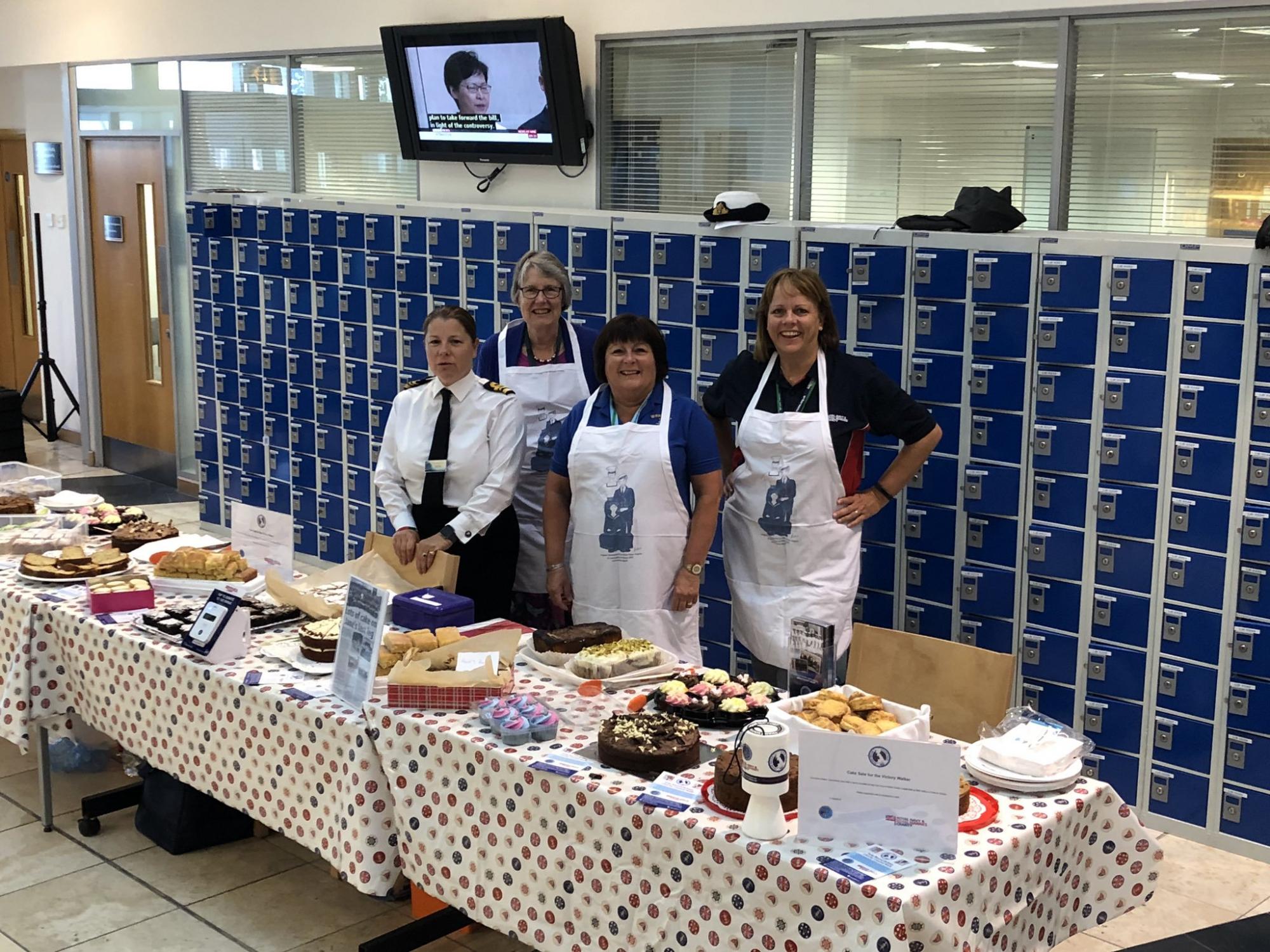 The Grand Finale of Jane's Victory Walk saw her complete 5,495 miles at HMS Victory in Portsmouth's Historic Dockyard at 10:30am.

Before that she was treated to breakfast at Morrisons who have been incredibly supportive of Jane's challenge at locations all round Britain.

Jane was escorted for the last leg through HMS Nelson and HMNB Portsmouth by HM Band of the Royal Marines Portsmouth and the Lord Mayor of Portsmouth, Councillor David Fuller. Jane was greeted at HMS Victory by serving RN, former wrens and supporters, along with the RNRMC mascots, Nelson the Cat and Boots the Dog.

A celebration cake was presented to Jane by her two chosen charities - RNRMC and WRNS BT. 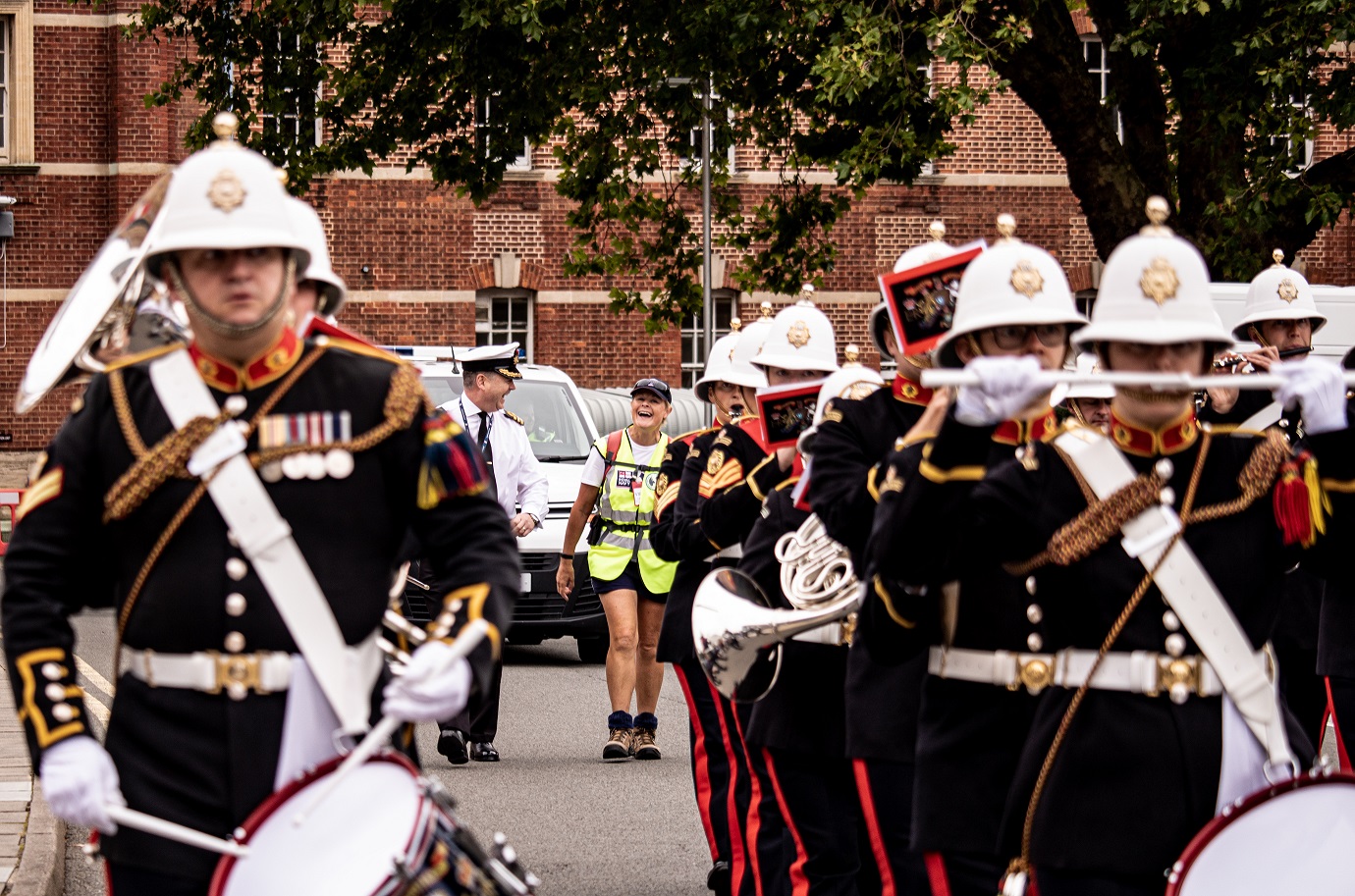