Supporting Bereaved Children at Christmas and Beyond

The Royal Navy and Royal Marines Charity have recently partnered with Scotty’s Little Soldiers to support children who have lost loved ones while serving in the Navy or Marines.

Founded by war widow Nikki Scott, Scotty’s Little Soldiers is a national charity which provides support to children across the UK who have lost a parent who served in the British Armed Forces. The charity was set up in memory of Nikki’s husband and father to her two children, Corporal Lee Scott, after he was killed in Afghanistan in 2009.  This year the RNRMC have awarded £5000 to Scotty’s Little Soldiers in order to support bereaved children from RN and RM families.

Part of this money went towards a Christmas party for the children, which this year took place aboard a boat on the River Thames. Children ranging from age 4 to 18, along with their surviving parent, travelled to London from all over the UK, courtesy of The Rail Delivery Group which represents train companies and Network Rail. The families stayed in London the night before the party, so they were ready for the celebrations to commence first thing in the morning.

At breakfast time the children were all given a newspaper reporting that the Queen’s precious jewels had been stolen. They were told they were being recruited by MI5 and were split into teams to undertake a special mission – to find the jewels. They were then taken down to the River Thames where they boarded the spectacular Dixie Queen boat.  After setting sail, London’s famous Tower Bridge was opened especially for them and The Metropolitan Police escorted them with a police boat to add to the excitement. The children then undertook various tasks and fun challenges to solve the mystery.  Once the jewels had been found they were presented to a Queen lookalike at a festive after-party venue, where the children also met Father Christmas.

Whilst the focus of the party was creating a fun, memorable experience, all activities were designed with childcare professionals to encourage wellbeing, confidence, communication and team-working – areas of identified challenge.

“The Christmas party is such a special event and every year the feedback we receive is that it means the world to the children”, commented Nikki Scott, Scotty’s Little Soldiers founder.

“These kids have all been through so much and facing Christmas without their parent is really tough – they deserve a special treat.  Meeting other children in the same situation makes them realise they are not alone and the friendships they make are so important to them. I looked around the room and everywhere kids were smiling.”

Scotty’s Little Soldiers Grants and Trusts Manager, Stuart Dark said: “Thank you so much to the RNRMC for helping us deliver this uplifting event, benefitting so many vulnerable bereaved British service families at a difficult time of year for many.” 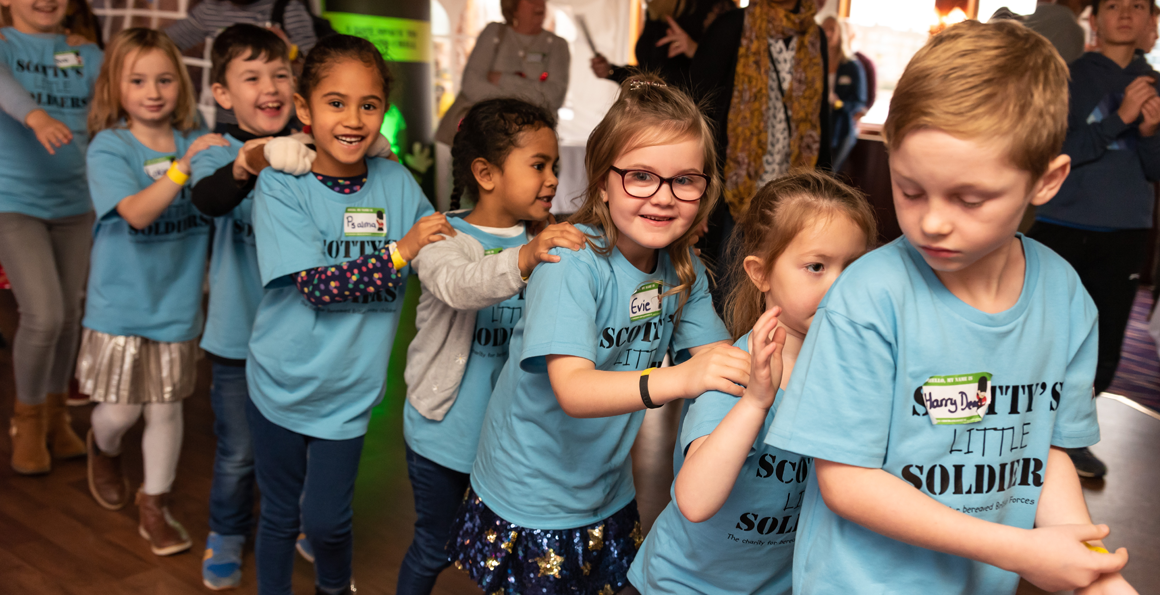 You can find out more about our support for families here.

See some highlights from the event in the video below!

Employment success for Naval families
Beneficiary
Towards the end of 2019 a new online platform launched to help families of serving personnel find...
16 March 2020
Panto Bus Tours Naval Bases
Beneficiary
Over the last few months hundreds of Naval families have enjoyed a morale boosting pantomime, as the...
25 February 2020
101-year-old WW2 Veteran Enjoys Surprise Birthday Visit To HMS Prince of Wales
Beneficiary
A 101-year-old World War II Royal Navy veteran was given a special surprise birthday visit to the...
6 February 2020
View all news
How your donations help
As the National Charity of the Royal Navy, beneficiaries lie at the heart of The Royal Navy and Royal Marines Charity's purpose, it is our duty to remain focused on their needs.
How we help
/how-we-help
Take part in an event
Whether it is a run, swim or trek, choose a fundraising event that suits you.
Get involved
/support-us/events/take-part-event