In Times of Need

We fund a number of frontline charities who assist working-age veterans in times of immediate need, helping them to face a range of issues including mental health issues, substance abuse, injury and homelessness.

“We were in “Bomb Alley” getting air raids constantly. ‘We saw horrible things. We had survivors of (RFA Sir) Galahad come on ship after she was bombed – they had 90 per cent burns.

“It wasn’t until 20 years after the Falklands that Dave’s mental health problems began. My family was away at the time – all of a sudden I started crying, having flashbacks and nightmares. I didn’t understand what was going on. By then I knew Combat Stress might be able to help so I made contact.”

“PTSD is like being in a dark pit - one that has no light or escape. Combat Stress gave me the light to go for.  I was broken, they gave me my life back – they saved me. They gave my wife her husband back and my children their dad back. I owe them everything.” 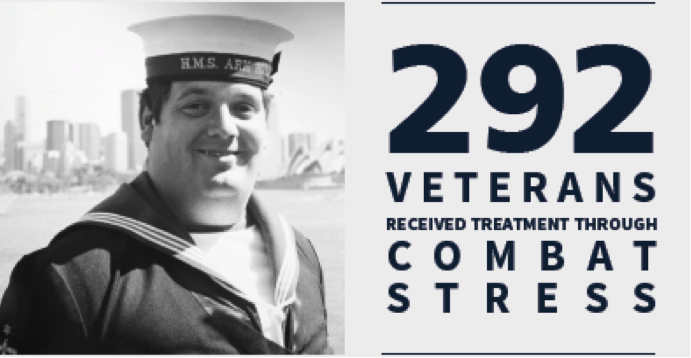 “After leaving the Royal Marines, I spent a little bit of time wobbling and adrift. I wanted to be in the Marines forever.

Then the injury came and that meant that I had to leave. That hit me really hard – I lost the brotherhood and family that I always thought I would have. It was a pretty dark time.

At Turn to Starboard, everyone becomes a team and people get to know each other very quickly. That is what forces life is like when you’re there. You might move to a new section, troop or unit and you instantly have to bond with each other. On a boat you to do the same and you have be there to back each other up and be strong for each other.

It is vital that charities keep supporting Turn to Starboard. Without the backing of the RNRMC and the other charities involved we wouldn’t be here. I went through the programme and watching other people go through it and to see that smile on their faces is massive.”

How your donations help
As the National Charity of the Royal Navy, beneficiaries lie at the heart of The Royal Navy and Royal Marines Charity's purpose, it is our duty to remain focused on their needs.
How we help
/how-we-help
Take part in an event
Whether it is a run, swim or trek, choose a fundraising event that suits you.
Get involved
/support-us/events/take-part-event